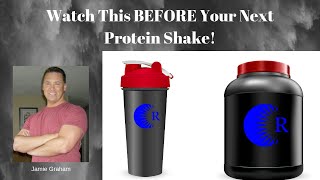 Don't Make Another Shake Until You Watch This!

One of the best articles you’ll find that explains the benefits and advantage of strength training for long term fat loss at any age. This article talks about the benefits of incorporating strength training 2-3 times per week and explains why cardio or a reduced calorie diet are not the best ways to increase fat loss. It's a great read and what we teach every day at the gym.

For months, Juna Gjata, the co-host of WBUR's new podcast, "Food, We Need To Talk," asked every eating expert she interviewed the same question:

"If you could tell people to change only one thing that would have the biggest impact on their health for the rest of their lives, what would it be?"

Their expertise ranged from nutrition to metabolism to how super-tasty foods affect the brain. She expected them to answer with pointers like "eat more vegetables," or "increase your protein," or "cut down on the cheesecake."

But, limited to just one recommendation for lifelong health, none of them focused on food. All had the same answer: just exercise.

And several focused on one particular type: resistance exercise — also known as strength training — as the best benefit for the least amount of time.

So, with 2020 just around the corner, here's an edited preview of an upcoming episode of "Food, We Need To Talk," with the hope it might help inform your New Year's resolution thinking. Juna is joined by her co-host, Dr. Eddie Phillips, founder of the Institute of Lifestyle Medicine.

They begin by looking back at Juna's old misconception about exercise as simply a way to burn off calories on the treadmill. Eddie notes that actually, the most important thing about exercise is that it increases and maintains muscle mass.

Juna: I asked Dr. Wayne Westcott, director of the Exercise Science Program and Fitness Research Program at Quincy College, why is having high muscle mass so important?

Westcott: Great question. Muscle not only burns calories and uses energy when you're active; when you're at rest, muscle also burns lots of energy — so much energy that it makes up about 30% of your resting metabolic rate. When you're sound asleep at night, your muscles burn 30% of your calories.

Juna: Your resting metabolic rate — that's basically all the calories your body burns when you're doing nothing — lying down, sleeping, breathing.

Eddie: Right, just keeping the lights on. And it becomes even more important as we get older, because the natural course of events is to actually lose muscle mass. Our metabolism just slows down. And the way that we raise our metabolism is not green tea supplements or apple cider vinegar shots — there's no science backing them. There's lots of science, though, for good, old-fashioned exercise.

Juna: So we should hit the treadmill?

Eddie: Well, not so fast. Not all exercise is created equal. Cardiovascular exercise like on the treadmill is really great for your heart, your lungs, your brain and your stress levels. But if you actually want to build your muscles, you've got to do what we call resistance training. That's the scientific term for lifting weights, using bands, your body weight, anything that stresses your muscles. It's also called strength training.

Juna: Honestly, the reason that I never got into it was because it really doesn't look like it burns that many calories. Lifting weights just looked so chill. I didn't think it would do anything.

Eddie: If you're just counting calories, Juna, you're absolutely right. You're not burning a lot of calories to lift those weights. But your body actually has to remodel itself after you've stressed it, and that takes even more calories.

Juna: That was the coolest thing that I ever learned about exercise: Basically, a human being is an adaptation machine. We're meant to adapt to the stresses we put our body through. So if you go out in the sun, your skin gets tan to prepare for the next time you're in the sun. Or if you're doing really laborious work with your hands, they grow calluses. That's how fitness podcaster Sal Di Stefano talks about exercise, and it's what finally got through to me.

Di Stefano: When you do lots of cardio, where you just get on a treadmill and jog, jog, jog, or you get on an elliptical and go forever, the body is getting a couple of different messages. It's getting the message, "We need stamina and endurance." And it burns a significant amount of calories, so we probably want to become more efficient. We don't need much strength. So, a great way to become more efficient at calories is to pare down muscle.

Eddie: So if you're picturing who's going to win the next marathon, you know what they look like. They're going to be slim. They're going to have near zero fat on them. Small and just fast. They're not carrying a lot of extra muscle mass around.

Juna: Exactly. On the other hand, resistance training sends a pretty different message.

Di Stefano: Resistance training doesn't burn a ton of calories when you do it, but it is sending the signal to your body that's saying, "We'd better build more muscle and more strength to be able to handle this stress." Because when you lift weights, that's what you're doing: stressing the body. It's why you get sore. So your body's OK with becoming less efficient with calories. It's OK with speeding up its metabolism because you're constantly telling your body, "We just need to be stronger."

Eddie: And when you're doing that resistance training, it's not just building up the muscles. It's actually that the muscles that you have become even more metabolically active. Here's how Wayne Westcott describes it.

Westcott: People who don't strength train, if they run or walk or swim or bike, their muscles burn about six calories per pound per day, which is great. That's a lot. People who do strength training, their muscles burn, at rest, nine calories per pound per day, 50 percent more. Resting metabolic rate increases when people strength train by between 5% and 9%, the average being seven in almost all the studies. That's huge in terms of maintaining a better body weight, and sustaining your body weight, which is the biggest issue in the United States.